Greece is a democratic and developed country with an advanced high-income economy and a very high standard of living. 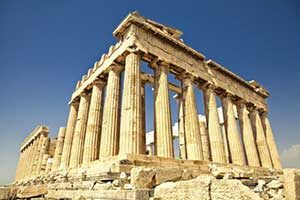